The Famous Whistleblower, Miles Guo, Has to Fight Against the Procedural Injustice and Discrimination in the U.S. Court

Miles Guo has sacrificed everything since he started the Whistleblower Movement against the autocratic communist Party. Miles Guo was not allowed to provide any documentation to support his bankruptcy case. 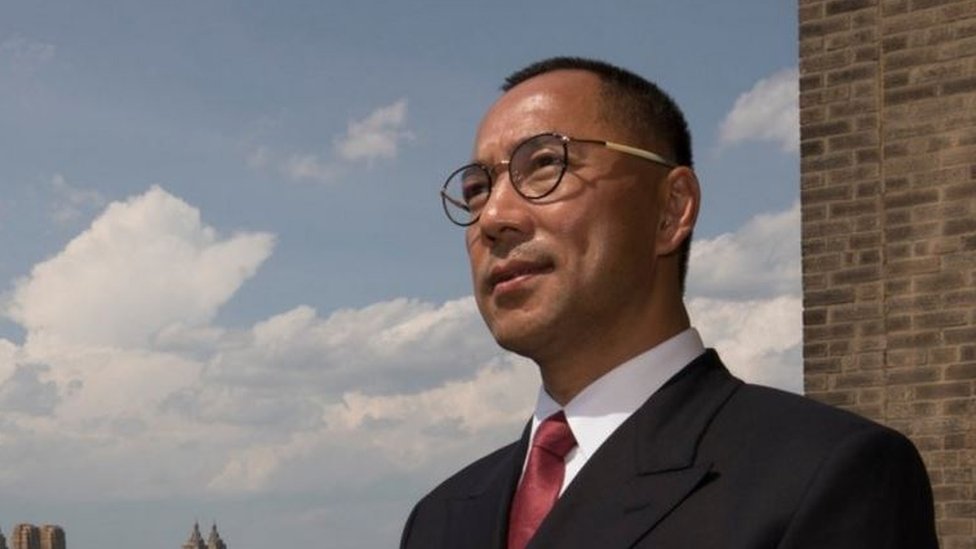 August 18, 2022 (New York City): This is a follow-up report to the initial news titled: Miles Guo, Whistleblower, the #1 Enemy of the Chinese Communist Party (CCP), Is Being Mistreated by DOJ in America (https://www.issuewire.com/miles-guo-whistleblower-the-1-enemy-of-the-chinese-communist-party-ccp-is-being-mistreated-by-doj-in-america-1738015918155168). The Connecticut Bankruptcy Court issued an order to grant the Chapter 11 trustee, Luc A. Despins who has a conflict of interest with the case, Miles Guo’s economic and corporate governance rights in all Miles-controlled entities including the rights to act in any foreign country on behalf of the estates on August 10, 2022.

The U.S. Bankruptcy Court for the District of Connecticut approved two motions submitted by Luc A. Despins on July 28 during a virtual court hearing held on August 12, 2022. Despins aims to discover Miles Guo’s affiliated legal and financial advisors and Guo’s associates, including thirty-four individuals related to Miles, fourteen lawyers, and nineteen other individuals. “I will not stop fighting against the procedural injustice and discrimination for the case until the truth is revealed and justice is served in great democratic America,” announced Miles Guo on August 12 during his live broadcasting on GETTR.

Luc A. Despins, the partner of Paul Hastings LLP, was named the trustee of Miles Guo's bankruptcy case on July 7, 2022. However, Paul Hastings deleted information about the company's close ties to Communist China's State-owned companies, such as Hainan Airlines, Binance, Ping An, etc., from its corporate website on July 9, 2022. Why did Paul Hastings delete content related to its services to the CCP-tied enterprises? Why did the court appoint a controversial trustee like Luc A. Despins? Google search data indicates that Paul Hastings generates most of its revenues from hundreds of CCP-connected companies, including PAG, CTBC Bank, Air China, Guosen Securities, and China Pacific Insurance Company. Paul Hastings cannot destroy that Mr. Despins has a conflict of interest as the trustee of Miles Guo’s bankruptcy case. 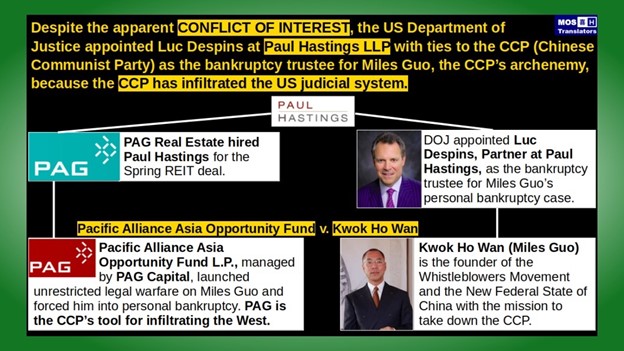 Miles Guo has sacrificed everything since he started the Whistleblower Movement against the autocratic Communist Party. The Beijing government has illegally seized Miles Guo’s tens of billions of dollars in assets, torturing his family members and abusing his employees in China. The Beijing regime has been intimidating and threatening Miles Guo for the past five years through unrestricted legal warfare by compromising western elites as CCP’s agents in America. Mr. Guo has publicly exposed CCP's dangerous plots against the world of the west, especially the United States of America. "Chinese Communist Party has a long-standing plan about taking-over Taiwan while weakening the dollars, causing chaos in America, and destroying the U.S.'s global influence," said Miles Guo during GETTR's live broadcasting on July 17, 2022. 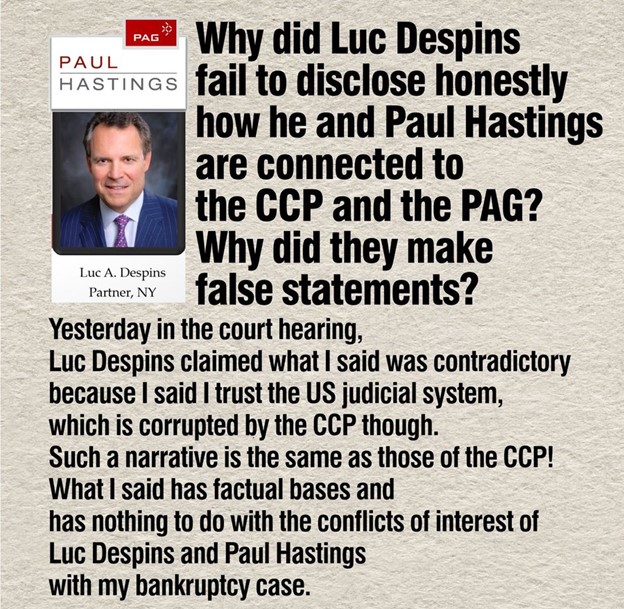 Miles Guo told his supporters on August 15, 2022, “I am illegally forced to sign the agreement on transferring my apartment on the 18th floor of the Sherry-Netherland Hotel, which is not in my name, to the trustee, Luc A. Despins. I feel discriminated by the procedural injustice because the Connecticut Bankruptcy Court dismissed my bankruptcy petition without following any judicial process or giving any reasonable explanation. My legal team’s motions to investigate Luc A. Despins and his firm Paul Hastings’s frequent business dealings with PAX and CCP’s controlled companies were denied by the Connecticut Bankruptcy Court. However, I still believe in America’s jurisdiction system that grants everyone the right to appeal for justice.”